Why India
As Foreign Entity 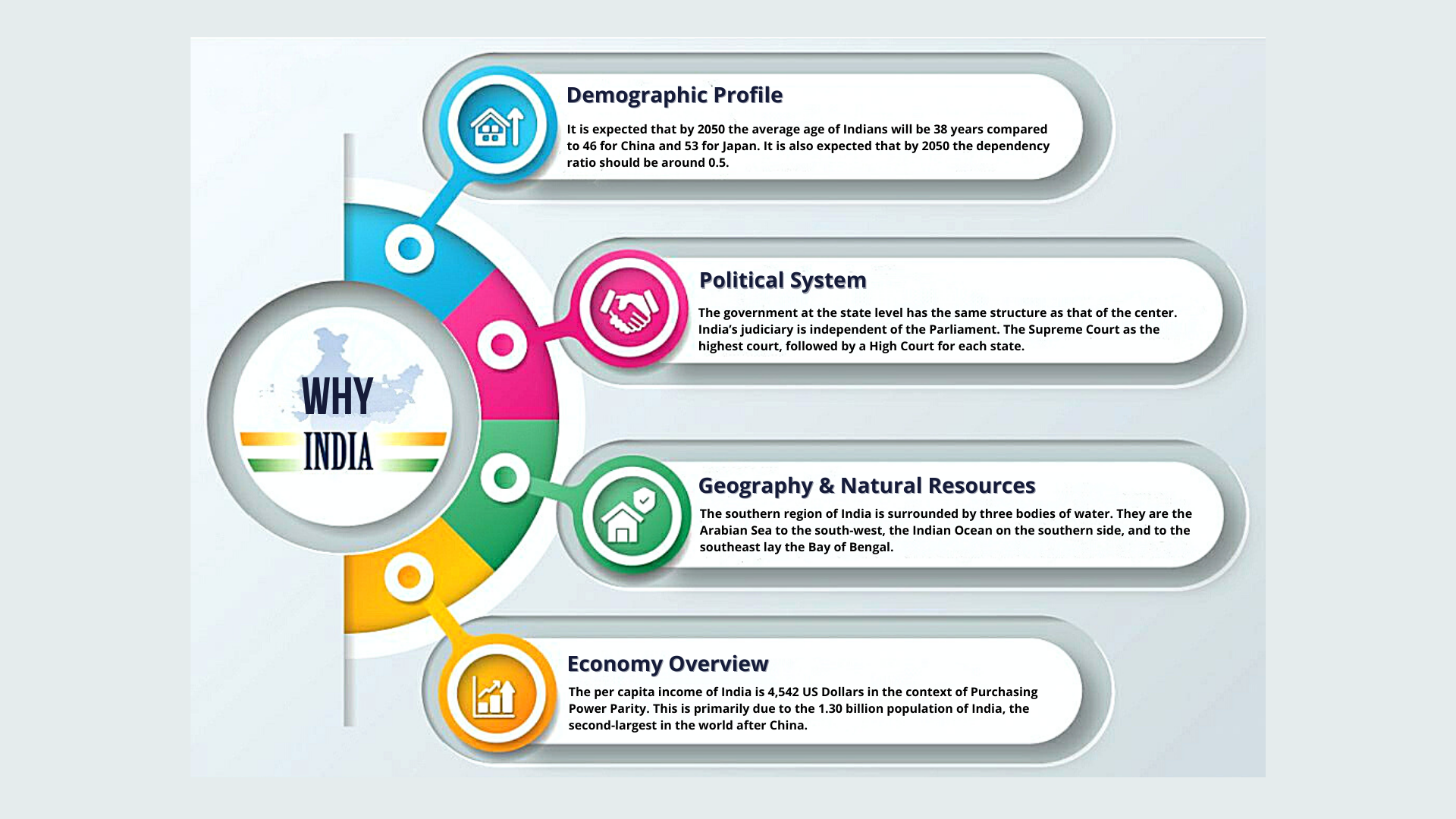 India is counted among the young nations as more than 50% of the population is below the age of 25 and more than 65% is below the age of 35. Whereas countries like the US, Europe, Japan, and China have a more aged population. It is expected that by 2050 the average age of Indians will be 38 years compared to 46 for China and 53 for Japan. It is also expected that by 2050 the dependency ratio should be around 0.5.

The Republic of India is a federal union of states divided into twenty-eight states and eight union territories. India is a sovereign, socialist, secular, and democratic country. India has a federal form of government with certain unitary features which are based on the British parliamentary system. The constitution head of Executive of the Union is the President and the Parliament of Union consists of the President and two Houses are known as Council of States (Rajya Sabha) and the House of People (Lok Sabha). The Constitution of India provides that there shall be a Council of Ministers with the Prime Minister as its head to aid & advice the President. But the real executive power is thus vested in the Council of Ministers with Prime Minister as its head. The government at the state level has the same structure as that of the center. India’s judiciary is independent of the Parliament. It has the Supreme Court as the highest court, followed by a High Court for each state and a hierarchy of lower courts

India has abundant resources and shares its borders with China, Bangladesh, Pakistan, Nepal, Sri Lanka, and Myanmar. North is surrounded by towering Himalayas, which slope out into the great Indo-Gangetic plains. In Central India, the Vindhya ranges separate the Deccan peninsula from the northern plains. The southern region of India is surrounded by three bodies of water. They are the Arabian Sea to the south-west, the Indian Ocean on the southern side, and to the southeast lay the Bay of Bengal.

In terms of GDP, the Indian economy is one of the fastest-growing economies. The growth rate has averaged around 6% to 7% and even during the recessionary phase of 2007-09, pandemic phase of 2019-20 Indian economy grew at a healthy rate of 5%. Outsourcing is the main booster for the Indian economy and brought in the biggest boon to the economy. Due to its English-speaking population, India is the preferred destination for outsourcing of IT products as well as business/knowledge process outsourcing. The Indian economy is diverse in nature. Among its various sectors, the major sectors include manufacturing industries, agriculture, textiles and handicrafts, and services.

Whereas Agriculture is a major component of the Indian economy and over 66% of the Indian population earns its livelihood from this area. But in the recent past, the service sector has started to play a major role and is expanding at a faster pace. India is considered to be a hub of outsourcing activities primarily in the areas of technical support and customer services.

The employment scenario is also dominated by the services sector, creating almost 62% of the jobs whereas the industry sector employed 20% of the workforce and the agriculture sector created 18% of jobs. The unemployment rate is around 10%.

The per capita income of India is 4,542 US Dollars in the context of Purchasing Power Parity. This is primarily due to the 1.30 billion population of India, the second-largest in the world after China. In nominal terms, the figure comes down to 1,089 US Dollars, based on 2007 figures. According to the World Bank, India is classed as a low-income economy.